Smarter Than the Average Bear

I came across a fun idiom today that I had to share with you ... Smarter Than the Average Bear. All it really means is that the person being talked about is smarter than average. But, you may be asking where the "bear" came from. That would be Yogi Bear, a vintage cartoon character from the 20th Century. 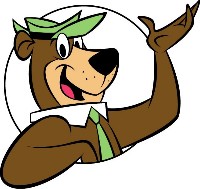 This bear lived in Jellystone Park (a reference to Yellowstone Park in the United States), and he would trick the tourists out of their picnic lunches because ... he was "smarter than the average bear."

It can also be used to reference someone who is better than average at anything. Just today, I was telling a friend that her progress with her New Year's resolutions were far better than the average bear.

Enjoy your new idiom of the day!
Posted by Cherie

About
Idiom Site
A Way with Words